Electric Guitar History takes us to 1930, where after being fired by National String Instrument Company, George Beauchamp began looking for new ways to increase the volume of the guitar. It was common knowledge by this time that passing a wire through a magnetic field produced a change in magnetic field intensity which in turn could be used to create a changing electric current in a properly coupled coil of wire. This same principal was the basis for electric motors, generators, phonograph needles, acoustical speakers, and many of the other products being developed and marketed at this time. As early as 1925 Beauchump had been experimenting by using phonograph needles to produce a single string electric guitar on a piece of two by four and believed that if a device could be developed which could “pick up” the vibrations of each individual string, and convert those vibrations into a proportional variation in electrical current, then that changing current could be amplified by one of the tube type amplifiers used typically in the PA and Radio systems of the day.

After many months of trial and error Beauchamp, along with Paul Barth developed a working “pickup” out of two horseshoe magnets and six pole pieces. The guitar strings passed through the magnets with each pole located so as to concentrate an independent magnetic field over each string. They wound the coil with the motor from Beauchamps washing machine, and according to Barth they ended up winding the coil with a sewing machine motor. An Electric Guitar History detail drawing from the original patent drawing submitted by Beauchamp is shown below

When the pickup was doing it’s job Beauchamp contacted Harry Watson, who was the plant superintendent from National and a highly skilled craftsmen who using all hand tools carved the neck and body of the first working electric guitar in a few hours at Beauchamps kitchen table, they called it the “Frying Pan” in the process making Guitar History!

With prototype in hand Beauchamp approached Adolph Rickenbacher, Rickenbacker a cousin of WWI flying ace Eddie Rickenbacker owned a local tool and die company and had been associated with Beauchamp at

National, manufacturing the metal bodies for the Resonators. Utilizing Rickenbackers influence and financial assistance they formed a company and they decided to call the instruments Rickenbackers. They began manufacturing the “Frying Pan” which immediately became popular as a Hawaiian lap style slide guitar and set the Rickenbaker company on it’s historical path of becoming the first manufacturer of electric guitars in Guitar History. Below is a photograph of the first fully manufactured electric guitar the “Frying Pan”

Probably the first man in Electric Guitar History to build and market an electric “Spanish” style guitar was Lloyd Loar. Loar was an acoustical engineer for Gibson, and legendary for his contributions to the design and development of the mandolin. Loar had also been experimenting with the electrical amplification of the guitar since the early 1920′s, and in 1933 created a new company Vivi-Tone as an independent subdivision of Gibson. Vivi-Tone was dedicated to the production of one thing, Spanish style electric guitars. Within a year Vivi-Tone failed, but the internal seeds had been planted at Gibson, the electric Spanish was the future of the guitar and the failed Vivi-Tone would go on to inspire Gibson to create the electric guitar that would make Guitar History and revolutionize the instrument, the ES-150.

Electric Guitar History continued In 1935 as Gibson commissioned Alvino Rey, a prominent slide guitarist of the era to assist in the development of a new guitar pickup. The prototype was developed by Rey, in conjunction with engineers at the Lyon & Healy company of Chicago and the final version was built by Gibson employee Walter Fuller. The pickup was initially incorporated on a lap steel model in late 1935, but shortly thereafter was introduced onto a standard f-hole archtop guitar and designated the ES-150, ( ES for Electro Spanish, 150 the price in dollars ). The first one was shipped from Kalamazoo Michigan on May 20,1936. The first modern electric guitar had been born, guitar history was being made. 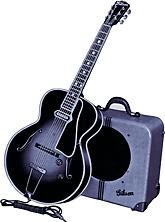 Even with the great success that the ES-150 had it still exhibited some less than ideal characteristics. The hollow body vibrations could be picked up and amplified, in addition there were problems with feedback, distortion, and undesirable overtones. Prominent jazz guitarist and inventor Les Paul believed that the solution was to introduce a solid body electric guitar, and his first successful attempt at eliminating these problems was affectionately dubbed “the log”. It consisted of two simple magnetic pickups constructed by Paul, and mounted on a 4″x4″ piece of pine. To give ” the log” the appearance of a guitar Paul glued two cutaway halves of a hollow body guitar to the 4″x4″. The result was a fine sounding jazz guitar without feedback or unwanted overtones, in 1946 Les Paul took his new solid body guitar to Gibson. Les Paul and his Log Guitar Below:

Gibson was less than enthusiastic about the prospects of a solid body guitar, convinced that consumers would not accept it. All previous attempts to introduce a solid body guitar had failed, but one man however, Leo Fender, believed that solid body guitars held the future of the guitar market. Fender, who owned a radio

repair shop in Anaheim had built a prototype solid body guitar made out of oak in 1943 which he rented out to musicians in order to get suggestions from them. In 1949 Electric Guitar History was made when Fender released what would become the first successful solid body guitar the “Esquire”, later renamed the “Broadcaster”, and ultimately the “Telecaster”. Fender’s solid body guitar had all the advantages of Paul’s, long sustain, and no feedback or unwanted harmonics but it never quite caught on with jazz guitarists. Jazz guitarists preferred the rounder more mellow and even somewhat more acoustic sound of the Gibson ES-150, but the Telecaster became extremely popular with country, blues, and later on in the 1950′s and 1960′s rock and roll musicians. It’s more trebly and truly “electric” sound made it the first great rock and roll guitar. Leo Fender pictured below:

Based on the success of the Fender solid body guitars Gibson took a second look at Les Paul’s solid body design and in 1952 decided to build a solid body guitar that would become the industry standard. Although the inspiration for the Gibson guitar came from Les Paul and was ultimately named after him, the design for the solid body guitar actually came from the companies new president Ted McCarty, and more closely resembled 1800′s model Gibsons than the ES-150. The pickups were P-90′s, originally developed in 1946 they had a warm, mellow sound and were very versatile. These original Les Pauls are some of the most highly sought after guitars in Electric Guitar History and regularly sell for many thousands of dollars.

Around 1961 Ted McCarty introduced the ES-335, a semi-hollow body guitar designed to incorporate the best of both the hollow body, and solid body designs. It quickly became popular and used by such influential guitarists as B.B. King and Chuck Berry. Both Gibson and Fender had introduced futuristic looking designs, the Gibson SG (solid guitar) and the Fender Stratocaster both became standard guitars for rock

artists in the 1960′s with the Stratocaster reaching it’s peak by becoming the guitar of choice used by Jimi Hendrix. Hendrix.

Although there have been a handful of other manufacturers in Electric Guitar History other than Gibson and Fender such as The Fred Gretch Co. formed in Brooklyn in 1883, who have contributed to the development of the electric guitar, the electric guitar as it exists today is for all practical purposes the same now as it was by 1961. Even today the overwhelming majority of electric guitars sold in the modern market are either a Fender or a Gibson. Below, the Guitar History making Original “Gibson Les Paul”.