Ohmme writes songs through an intensive collaborative process that includes late-night, two-guitar improvisation sessions. Sima Cunningham and Macie Stewart, both Strat players, have developed a way of reflecting each other’s vocal and guitar performances that they describe as “stereo.” Photo by Ash Dye

Walking a high-wire between melody and noise, adventurous guitarists Sima Cunningham and Macie Stewart have crafted a distinctive approach to indie-rock that frames the unconventional side of electric guitar within approachable and catchy songwriting. As the band Ohmme, which is completed by drummer Matt Carroll, these denizens of Chicago’s improvisational music scene have toured with hometown heroes Wilco and Tortoise, as well as folk-rockers Iron & Wine, and alt-rockers the Ophelias and the Joy Formidable—a testament to the wide dimensions of their sound. With their latest album, Fantasize Your Ghost, Ohmme have honed that sound into its most interesting form yet.

Cunningham and Stewart, who formed Ohmme in 2014, are both classically trained pianists, and Stewart also plays violin. They began their respective journeys with the electric guitar around the same time, with the shared desire to say something different with the instrument. Stewart saw the guitar as a fresh tool for composing and a new canvas for the lessons she’d learned studying piano and violin. Cunningham tended more toward the off-kilter side of the instrument, with a love of controlled chaos. A mutual penchant for textural, anti-rock playing and unusual arrangements, and time spent worshipping at the altar of Brian Eno and Robert Fripp, helps to further tie their approaches together.

Stewart and Cunningham’s guitars and voices dance effortlessly around each other throughout Fantasize Your Ghost in a way that’s instinctual and impressive, without sacrificing the sanctity of the songs. They hide tricky arrangement concepts in often-playful earworms, and their vocal harmonies have a beatific and effervescent sonic quality that’s as appealing as they are unique. And while the album has cutting-edge-pop appeal, it also offers shades of New York City’s ’80s no wave movement’s spirit and quirkiness (“Ghost”), heaps of skronk-and-fun texture (“Selling Candy”), and killer tones aplenty. It’s difficult to tell where Cunningham’s contributions end and Stewart’s begin on Fantasize Your Ghost, and ex-Deerhoof member Chris Cohen’s production decorates these 10 songs in a way that adds flair without burying the duo’s phenomenal weaving.

Armed with a pair of Fender Strats and, mostly, some simple pedals, Ohmme’s sonic magic relies on unexpected arrangements and sophisticated musical ideas, rather than gear-based gimmicks. Premier Guitar spoke to the guitar-wielding dyad about creating their second album, the intuitive side of their musical relationship, the very different reasons they’re both dedicated Strat players, and lessons learned on the road from Wilco’s Jeff Tweedy.

What’s the X factor that makes the bond between you so strong?
Macie Stewart: Sima and I get along really well, but we’re kind of opposites in how we go through the world. We both have an affinity for improvising and following our intuition, and that brings us together, and we have a very similar goal for what we want our music to be, but we like to accomplish things in different ways and there’s always a good push/pull because of that. I think that push/pull is why it works so well, but also why we’ve found our own distinct niches within the larger idea that we have for Ohmme.

“We’ve always been really excited about finding out how we can make the most noise and fill up the most sonic space between the two of us, and how to sound like a much larger band than we are.”—Macie Stewart

Sima Cunningham: Interplay is such a big part of our sound, and because we play the same instrument we always think about how we can take a single idea and pull it apart for two sides of the stage and give things a stereo effect and play around with that concept in interesting ways. Both of us have backgrounds in classical music and we’re both very familiar with polyphonic music and how things can move as one, yet separately, in music.

A lot of Fantasize Your Ghost’s songs and guitar interactions sound like they could’ve only been written by bashing them out in a room together. How do you two approach songwriting?
Cunningham: Up until this record, our standard way of working was coming up with vocal melodies and chord progressions separately and turning them into an Ohmme song by adding to them, or moving arrangement ideas around to make it something of the two of us. If a song doesn’t have space for both of our input, it doesn’t become an Ohmme song. On this record, because we were together so much on tour and had shorter windows of time to make the songs flourish from small ideas into full-blown songs, there was a lot more collaboration early on in the songs’ lives. There was a lot more give-and-take involved. The instrumentals got worked out with the two of us sitting together in a room and playing through an idea, improvising, and allowing that to lead the arrangements. We demo’d all of these songs with Sam Evian at his studio in upstate New York, so we had rough sketches, but we also did a lot of the arrangements when we actually tracked the record with Chris Cohen in Wisconsin. Chris helped us to conceptualize some of the backbones and helped us find the guitar tones we ultimately used on the record.

Stewart: For this record, we hashed songs out together much more and spent a lot of time just playing through them chordally and stripped. That helped spark ideas a lot, to see what textures we wanted when we recorded the songs properly. The arrangements are the most collaborative aspect of the band. It’s the part that we both have the most fun with and the part we both trust each other the most with, in that we both know how to make ideas really into Ohmme songs through arrangement. 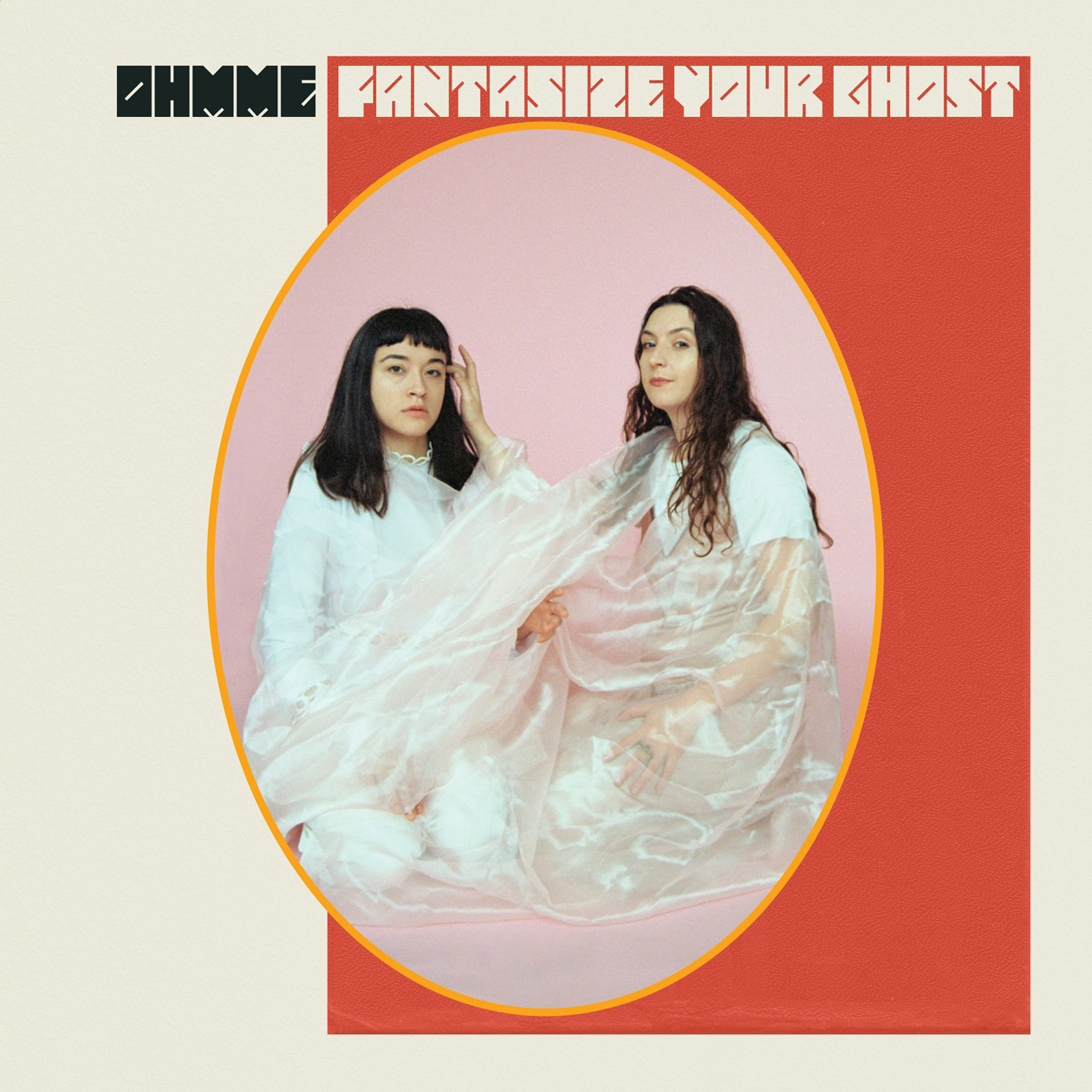 TIDBIT: Fantasize Your Ghost was produced by Chris Cohen, formerly of Deerhoof, who helped define the set’s varied guitar tones and strengthen its song structures.

Can you compare your styles as guitarists and tell us why you are so complementary as players?
Stewart: I think what we’ve found in the last year of making this record is that we’re both really drawn to texture and noise. That’s the center of our Venn diagram. And we both just love songwriting. I tend to lean towards playing bass-oriented parts and play guitar in a more linear fashion, with more single-note things. Sima works a lot through chords and larger sonic bases—things like finding different chord voicings or filling in the middle of the guitar’s sonic range. It’s become a thing that just developed naturally, but we both ended up in those specific spaces as players and it’s really cool to have someone to work with that’s so complementary. We’ve always been really excited about finding out how we can make the most noise and fill up the most sonic space between the two of us, and how to sound like a much larger band than we are. We want to make a wall of sound at points, and we’re both really focused on dynamics and figuring out how we can get the largest dynamic range between just the two of us. That’s something we’ve thought about from day one.

Cunningham: We’ve developed as electric guitarists very much in tandem, and both of us had a lot of experience on other instruments when we started Ohmme. Both of us were very new to the electric guitar and we were also inspired by the same sonic universe of improvised music, krautrock, and a lot of guitar that stems from the sort of anti-rock world. Macie is a very precise guitarist, and I tend to lean into the chaos a bit harder. Both of us take some chaotic solos, but I think Macie knows how to take chaos and make it all dance around a musical idea, whereas my chaotic playing is linear and just runs off into a single direction. An example of that is my guitar solo on “Ghost,” which never really loops back on itself. It just runs in one direction and sort of falls apart. I love it when you can hear a guitarist almost lose control of the instrument.

Sima, what effect did you use for the spacey glitches on the “Ghost” solo?
Cunningham: It’s a Malekko 616 analog delay, and that solo is that pedal having its knobs moved by my left foot while I play. It’s a lot of fun to do that dance between your fingers creating some rhythmic chaos and melody, and then disrupting all of it with your toe. You’re confusing your own body.

Richard Fortus dishes on the many guitarists who...

The greatest Guitar World magazine covers of all...

The Fine Art of Layering Guitars

Bibi McGill: “Every night before I went on...