Deap Lips is a collaboration project between Lindsey Troy and Julie Edwards of Deap Vally, and Wayne Coyne and Steven Drozd of the Flaming Lips.

Motorcycles and laser beams introduce a fuzzed-out mid-tempo riff to kick off the technicolor musical epic “Home Thru Hell,” the first track on Deap Lips, the new collaborative project from Deap Vally and the Flaming Lips. The song’s lyrics have fantastical tendencies alluding to classic prog-rock fare such as vultures and hypnotizer’s spells, while lines like “Riding along through the deep valley/Where the dragons of madness roam” and “Taking all my wisdom/From the flaming lips of youth” creatively shout out the band names of the two groups involved in this super-collab. “Home Thru Hell” acts as a bold and brilliant overture for an album that is brimming with fun and off-the-wall musical treats, including light rapping, robot voices, a Steppenwolf cover, and wild synth and guitar tones throughout.

Listening to Deap Lips, it’s easy to hear the musical characteristics of both Deap Vally and the Flaming Lips, but each band’s sounds have been so well-kneaded into the musical dough of this project that the album came out of the oven sounding truly original. It’s no surprise that this crew could cook up something fresh as both bands are seasoned collaborators: The Flaming Lips are well-known for working with a wide range of artists, from Miley Cyrus and Kesha to Mick Jones and the White Stripes, while Deap Vally have been working on a collaborative album with artists such as KT Tunstall, Peaches, and members of bands like Warpaint and Queens of the Stone Age.

As a guitar and drum two-piece, Deap Vally have just the right amount of room in their sound for two Flaming Lips to join in with synthesizers, bass, some guitars, and a handful of songs. Guitarist Lindsey Troy explains, “When you’re in a two-piece, people are always asking, ‘Will you add a third member?’ So this is our way of experimenting with that. It was fun to throw someone else in the room to change up the dynamic and it’s been great. We just thought we’d do one song with the Flaming Lips. We didn’t know it was gonna turn into a whole record, but it’s amazing that it did.”

It took some kismet for the two bands to come together. In 2016, Wayne Coyne was in Raleigh, North Carolina, meeting with the creator of the “World’s Largest Gummy Bear” about making some props for the Lips when he checked out a show by Wolfmother, where Deap Vally was opening. He tracked down Lindsey at the merch booth and the two hit it off immediately. It was only a matter of time before Lindsey hit up Coyne with the proposal to work on some music together, and in early 2018 she and drummer Julie Edwards were on their way to Wayne’s home studio, Pink Floor, to work with Coyne and fellow-Lip Steven Drozd. “We went out to Oklahoma City and stayed with Wayne at his house and wrote and recorded for five days, had a really great time, made some awesome stuff,” says Troy. “After that, he kept sending us more ideas and was eventually like, ‘Let’s do a full album.’ He’d send us stuff and we’d go into the studio in L.A. and send him stuff and that’s how the rest of it got finished.”

We caught up with Troy and Drozd to get both sides of the story behind the songwriting, gear, and guitar sounds on Deap Lips, and made sure to ask if the two bands will ever come together for a live tour.

Once Deap Vally arrived in Oklahoma City at Wayne’s house, how did you all get started on this record?
Lindsey Troy: It’s kind of funny. We’d already done several of these collaborations and the way we approached them in the past was that we’d just go into a room and start jamming on ideas in the studio and create a song that way. That’s what we were expecting to do with the Lips, so we didn’t really bring anything. But they were like, “We don’t really write that way,” so they had a couple things prepped for us, which was cool. We weren’t expecting that.

One night, we went into the studio and Julie and I were on our instruments and Wayne played around with some beat machines and we found some riffs that way. So we brought those to Steven and he wrote more parts and fleshed them out.

“The thing that I was into immediately is that their music is really visceral—it’s riffs and energy.” —Steven Drozd

Steven Drozd: It’s a strange thing. I think maybe people have an impression of how these things usually go and for us it can go so many ways. I heard their music just a few days before, because Wayne wanted me to come to the studio and work with them. Besides the Flaming Lips, Wayne’s always got art and other stuff going on, so when he told me he was interested in trying to make music with this band, I wasn’t that surprised. We’re always working on music that might not work for the Flaming Lips but could work for someone else, so I had that in mind already.

I met them and we hit it off pretty well and it turned out that Julie’s brother [Greg Edwards] and I made some music together way back when in the ’90s. He was in a band called Failure that toured with us in 1994. It was pretty easy getting to know each other.

The thing that I was into immediately is that their music is really visceral—it’s riffs and energy. I thought this could be a cool mix of us doing some of our more ornate musical things and them doing some of their more raw, riff things, and it seems like it kind of mostly went that way. It was great from the get-go.

How many tracks did you do together in Oklahoma City?
Troy: We did four. It was “The Pusher,” “There Is Know Right There Is Know Wrong,” “Home Thru Hell,” and “Shit Talkin.” 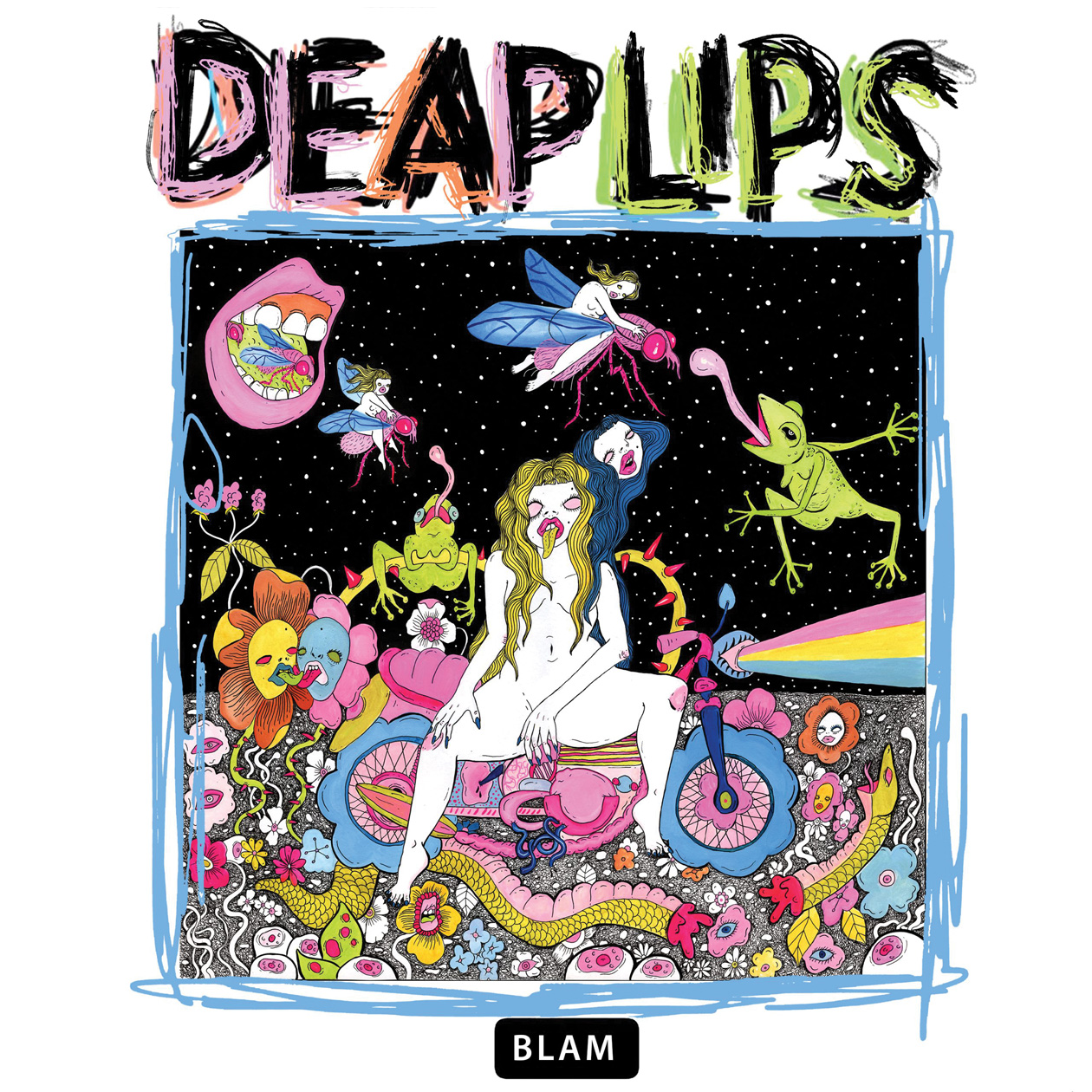 TIDBIT: Four of the 10 tracks on Deap Lips were made with all band members present at Wayne Coyne’s home studio in Oklahoma City. The remaining songs were curated through Coyne and Steven Drozd in Oklahoma exchanging song ideas back and forth with Deap Vally’s Lindsey Troy and Julie Edwards in L.A.

Drozd: Wayne had a few things and “The Pusher” is something I started in my studio at home. I didn’t get very far because I couldn’t find a cool way to do the vocals that I liked. I think it turned out really well with Lindsey’s voice.

“There Is Know Right There Is Know Wrong” is based on a riff of a song of Wayne’s nephew’s [Dennis Coyne, of Stardeath and White Dwarfs] from years ago, and I built a new chord structure for a bridge and chorus.

How did you end up doing a cover of Steppenwolf’s “The Pusher”?
Drozd: You know, I just get these weird ideas. I heard “The Pusher” by Steppenwolf on the radio—it’s a Hoyt Axton song but Steppenwolf had the hit with it. There are elements of the song that are so amazing. It’s so dark and fucked up and weird. I thought, wouldn’t it be cool if a band like Kraftwerk did a version of “The Pusher?” Like, this cold, electronic version that doesn’t have the bluesy solo and it’s all cold and drum machine-ish. It just started like that.

Troy: It was cool. It’s a classic-rock song, but it’s so wildly different from the original. Basically, only the lyrics are the same—the music is different and the melody is different.

Speaking of vocals, on “Motherfuckers Got to Go” you rap a little at one point, which is kind of different than other Deap Vally stuff.
Troy: That song was definitely kind of a weird one, but it ended up coming out kind of cool. It’s very repetitive but it works because it’s anthemic. We’ve played around with vocals like that a little bit in the past, so we were down for it.

Meet the Slite, the modular guitar that fits...

Buzz Osborne: “Why does every metalhead who picks...